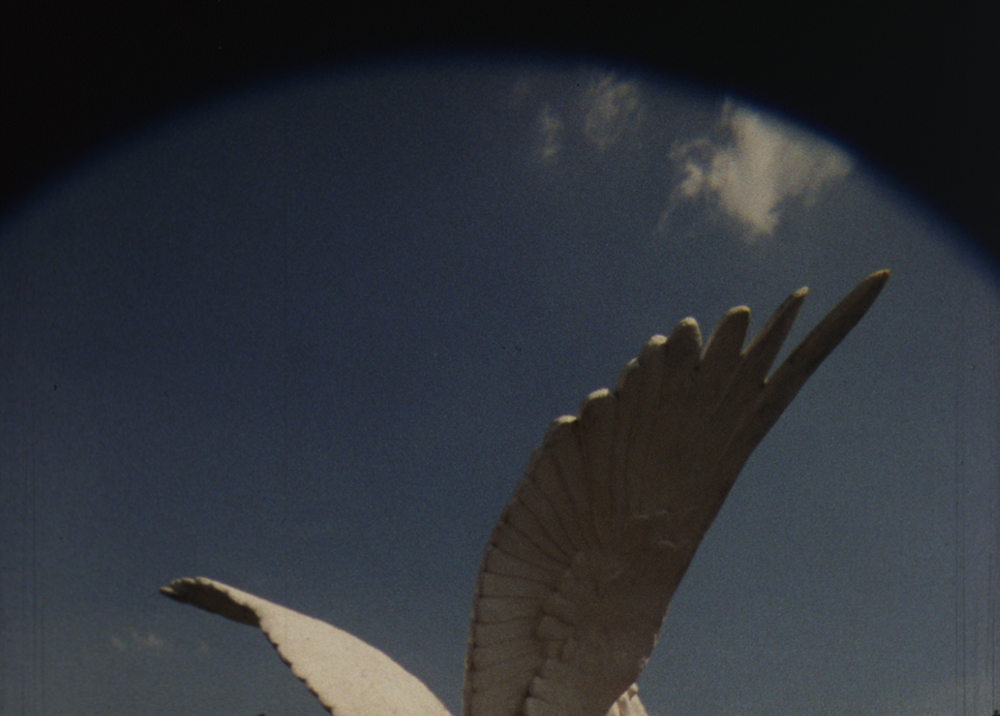 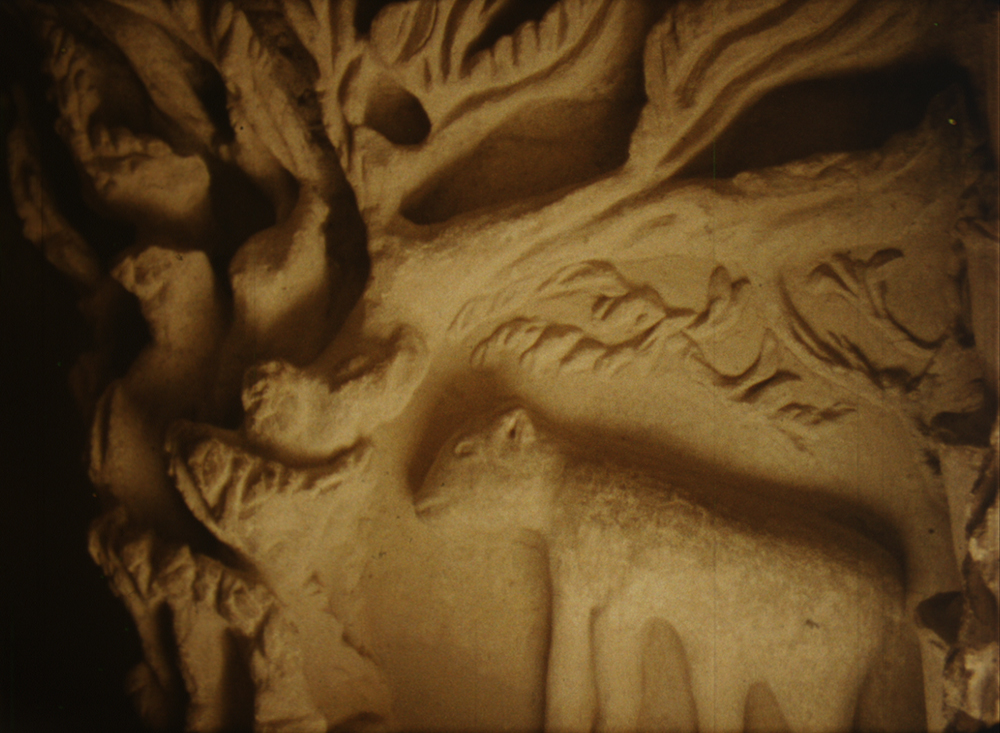 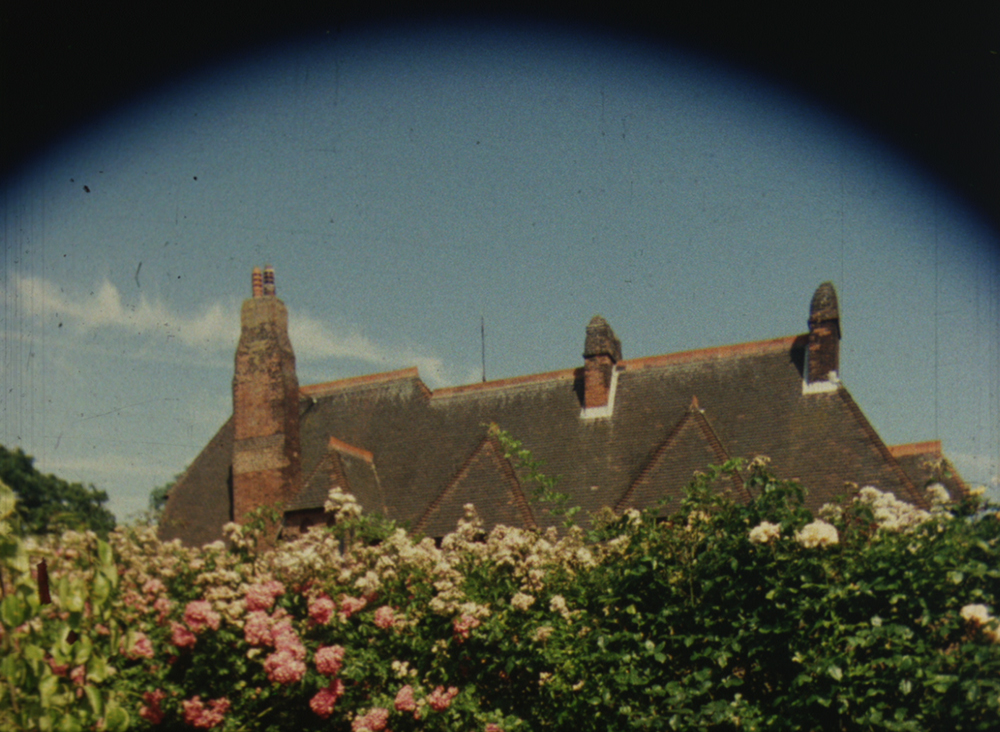 Under construction: 7 notes on Sílvia das Fadas’ The House is Yet to Be Built
Stefan Ramstedt

The stories that Sílvia das Fadas has gathered for The House is Yet to Be Built are about heroes. Perhaps some find the idea of believing in heroes a bit passé today. Bifo Berardi argues that they perished some 40 years ago. But then let us remind ourselves that it’s important to believe in what one likes – as the ostrich told the errand boy.

The stories of The House is Yet to Be Built are separated by intertitles, all against the same warm dark red background, giving a title and an introduction to each chapter. Even if the stories are divided into chapters, they are unified by their enclosure within leader – head and tail, as they are called. They may be separated in both time and space, yet in das Fadas’ film these stories constitute a singular corpus.

The House is Yet to Be Built is a film about a number of revolutionary spirits who left behind them monuments of their ideals. Some of these works were made by well-known artists (William Morris’ Red House and Niki de Saint Phalle’s Tarot Garden), and others by so-called outsider artists and craftsmen (Ferdinand Cheval’s Le Palais idéal, Robert Garcet’s Tour d’Eben-Ezer and Stan Ioan Pătraş’ Cimitirul Vesel).

In cinema, the house has long been a site of terror – a place for entrapments, for encounters with horror and violent showdowns. But for as long, they have also constituted shelters from hostile surroundings. There are also films that diverge from this duality. Nicholas Ray’s Johnny Guitar is a film in which the walls of the houses are inscribed with stories. “I didn’t find this place, I had to build it. How do you think I was able to do that?” asks Vienna, deprived of sleep due to bad dreams. “For every board, plank and beam in this place …”, she continues, before being interrupted by Johnny. Like Vienna’s house, the buildings presented to us by das Fadas seem to carry their own history. Through the cracks appear glimpses of the very real nightmares that haunted their makers: exploitation, war, oblivion.

In many of the films that Frank Borzage made in the early 1930’s, the house appears as the promise of a future. However, in his case you needed to have money in order to have a home, and to have money you needed to work, and work was scarce during the Depression. “I’m afraid of the streets”, says Hans in Little Man, What Now?, a film that – just like Bad Girl, After Tomorrow and Man’s Castle – tells a story about a young couple looking for a place to live. A house for Borzage is always a dream, a blueprint, a promise. In its materialized state, it is a world within a world as William Morris says in The House is Yet to Be Built; defined as the negation of that which surrounds it.

The House is Yet to Be Built is a cartographic work. In Hauterives, London, Bassenge Capalbio and Săpânța liberation zones have been marked out and there are lines of communication between them. Each is a place with its own specific struggle, but it’s certain that these are struggles for something, rather than against. A monument is always intended for the future. The architectural works depicted by das Fadas are yet to be part of a world. The map that is drawn is of a world to be. A world inhabited by strange creatures where languages are spoken in broken tongues.

das Fadas offers us brief glimpses of this world that she’s been travelling in. She shares with us images taken of the sites she’s seen and the houses she’s visited. Emphasis is put on the different materials: stone, brick, glass, wood, but also on the surrounding vegetation. These are the images of a traveller; captured with a hand-held camera whose small movements inscribe the filmmaker’s presence into the images themselves.

There’s a didactic side to The House is Yet to Be Built. By way of the intertitles, we learn about the works and their constructors. The information is sparse (there are names of people, buildings and places no years), but sufficient enough to make sure that we’re looking at things from her perspective. The buildings depicted are now tourist attractions; some with cute little shops selling souvenirs and merchandise. To pierce through this haze of falsity and capitalist appropriation, das Fadas had to find a rhythm and a succession of images that are true to the rebellious spirit in which the works were constructed.

The chapters begin with something that could be called an establishing shot, before moving closer to its object of study. After this first movement of approaching, each chapter seems to invent its own logic. Even if – as I argued above – these buildings and their stories constitute a singular corpus, das Fadas manages to preserve their uniqueness. As the foundational pillars of a future world they stand alone yet together.

With The House is Yet to Be Built das Fadas inscribes herself into the great tradition of wandering filmmakers, cinécrivains of letters and postcards: Chris Marker, Peter Hutton, Chantal Akerman, Mark LaPore, to name just a few. These are filmmakers for whom the act of making a film was an act of sharing an experience. “I was here. This is what I saw.”

“For me,” Thom Andersen once wrote, “movies are, first of all, ‘tools for conviviality,’ to borrow a phrase from Ivan Illitch, a means of sharing images and ideas to create a circle of friends, or virtual friends.” This is a lesson that das Fadas took to heart from her former teacher. However, as the title reminds us, the images and sounds that she shares with us are of a world that does not yet exist. Instead of inviting us to experience one world, she asks us to take part in the construction of another, or rather to continue the work on this one – to add our own boards, planks and beams.

The House Is Yet To Be Built

It was the purpose of my lecture to raise another question than one of mere art.[1] I specially wished to point out that the question of popular art was a social question, involving the happiness or misery of the greater part of the community. The absence of popular art from modern times is more disquieting and grievous to bear for this reason than for any other, that it betokens that fatal division of men into the cultivated and the degraded classes which competitive commerce has bread and fosters; popular art has no chance of a healthy life, or, indeed, of a life at all, till we are on the way to fill up this terrible gulf between riches and poverty. Doubtless many things will go to filling it up, and if art must be one of those things, let it go. What business have we with art at all unless all can share it? I am not afraid but that art will rise from the dead, whatever else lies there. For, after all, what is the true end and aim of all politics and all commerce? Is it not to bring about a state of things in which all men may live at peace and free from over-burdensome anxiety, provided with work which is pleasant to them and produces results useful to their neighbours?

It may well be a burden to the consciousness of an honest man who lives a more manlike life to think of the innumerable lives which are spent in toil unrelieved by hope and uncheered by praise; men who might as well, for all the good they are doing to their neighbours by their work, be turning a crank with nothing at the end of it; but this is the fate of those who are working at the bidding of blind competitive commerce, which still persists in looking at itself as an end, and not as a means.

It has been this burden on my conscience, I do in all sincerity believe, which has urged me on to speak of popular art in Manchester and elsewhere. I could never forget that in spite of all drawbacks my work is little else than pleasure to me; that under no conceivable circumstances would I give it up even if I could. Over and over again have I asked myself why should not my lot be the common lot? My work is simple work enough; much of it, nor that the least pleasant, any man of decent intelligence could do, if he could but get to care about the work and its results. Indeed I have been ashamed when I have thought of the contrast between my happy working hours and the unpraised, unrewarded, monotonous drudgery which most men are condemned to. Nothing shall convince me that such labour as this is good or necessary for civilization.”

[1] On March 12 The Manchester Examiner had printed (p.6) a letter (reprinted from the Manchester Weekly Times, March 10, 1883, p.5) complaining that Morris’ lecture “Art, wealth, and Riches,” delivered at the Manchester Royal Institution on March 6, had raised another question than one of “mere art.” The writer of the letter went on to ridicule Morris’ contention that competitive commerce would have to be abolished before art could flourish, and he argued that in fact competitive commerce was the very condition under which art did flourish. Morris’s letter was a reply.

“If, as is only too possible, we are to perish, let us see to it that we do not perish without having existed. The powerful forces that we have to fight are preparing to crush us; and it is true that they can prevent us from existing fully, that is to say from stamping the world with the seal of our will. But there is one sphere in which they are powerless. They cannot stop us from working towards a clear comprehension of the object of our efforts, so that, if we cannot accomplish that which we will, we may at least have willed it, and not just have blindly wished for it; and, on the other hand, our weakness may indeed prevent us from winning, but not from comprehending the force by which we are crushed. Nothing in the world can prevent us from thinking clearly. There is no contradiction whatever between this task of theoretical elucidation and the tasks set by the actual struggle; on the contrary, there is a correlation, since one cannot act without knowing what one intends and what obstacles have to be overcome. Nevertheless, since the time at our disposal is in any case limited, we are forced to divide it between thought and action, or, to talk more modestly, preparation for action. It is not by any set rule that this division can be determined, but only by the temperament, turn of mind and natural gifts of each one, by the conjectures each one forms about the future, by the chance play of circumstances. At all events, the greatest calamity that could befall us would be to perish incapable both of winning and of understanding.”